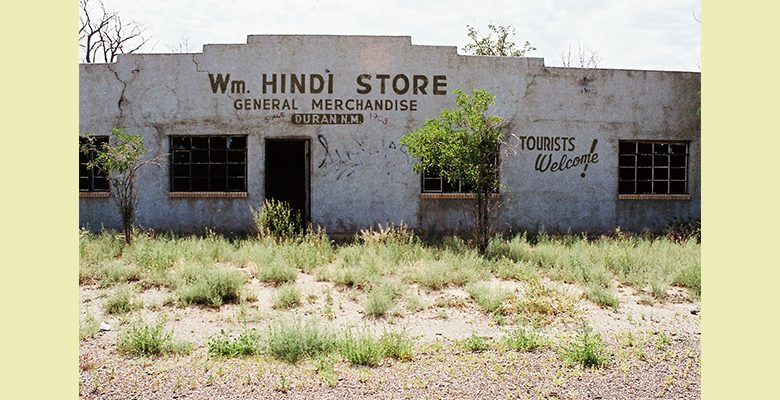 Someday I’ll tell you a tale of a town that didn’t owe its very existence to the railroad, whose citizen’s livelihoods weren’t later subject to the capricious placement of state and federal highways, and which didn’t finally find itself cut-off from the travelers that were its lifeblood. But it ain’t gonna be the story of Duran.

In February 1902, the El Paso & Northeastern Railroad finished the “Arrow Route,” a stretch of track between El Paso and Santa Rosa, where a connection to Leadbelly’s Rock Island Line awaited. Blas and Espiridón Durán, two brothers, owned wells in central New Mexico which could provide water to railroad work crews. So, the railroad built repair shops and even a wooden roundhouse in what became Duran. The railroad also turned the town into an important supply point for area ranches virtually overnight. Duran’s population probably peaked shortly afterward at 300 or so.

But the railroad eventually moved its operations south to Carrizozo and the roundhouse came down in 1921. Yet Duran remained important to ranchers and, when two-lane U.S. Highway 54 came right through the heart of town in the 1930’s, the increased flow of north-south traffic gave Duran another boost. This lasted until the 1960’s, when I-25 was constructed about 60 miles west, strangling U.S. 54 of travelers.

Duran is not a true ghost town. It still has residents–probably around 35, in fact–but two of its most interesting buildings are long-abandoned. One, shown below, is a two-story building made of buff-colored sandstone marbled with white. This was a general store and hotel. Badly faded lettering above the doors reads: “dry goods furniture hardware grocery & feed’s”. It’s still a beautiful building whose quaint façade belies a sinister and surprising history. 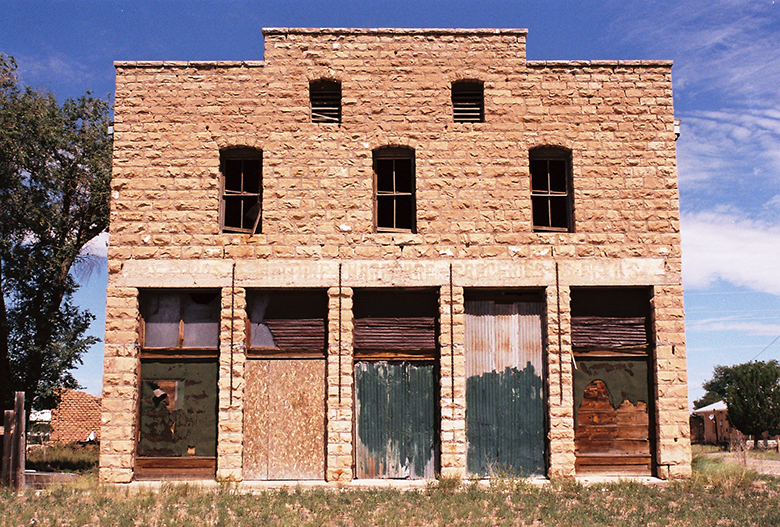 The building was owned by Anton J. Coury, a man of Lebanese descent, who lived with his wife, Raffa, and children, Fred, Anna, and Emma, in the upstairs hotel. On September 3, 1921, the store was robbed by five men and Mr. Coury was shot and killed while resisting. Raffa was also shot and severely wounded, reportedly surviving only because a potentially lethal bullet struck the metal clasps of her corset and was deflected. Young Freddy then bravely intervened, driving away the thieves by relentlessly pelting them with canned goods when their gun jammed. I don’t know if the store ever opened for business again.

A search for the killers began immediately and Francisco Vaisa, Isodoro Miranda, and Carlos Rentenería were quickly caught. Luis Medrano was apprehended some months later. The fifth man, Eziquel Machucha, was never found and it’s believed he escaped back into Mexico.

The prisoners were sentenced to be hung on July 28. 1922, but Vaisa appealed his conviction and bought himself some time. On the appointed day, in Estancia, about 40 miles northwest, with Mrs. Coury and her children observing, the 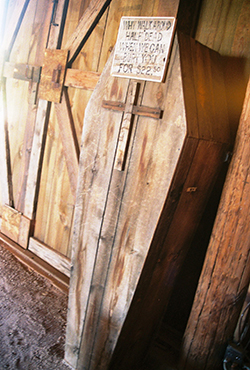 other three men were brought to the scaffold as the sun rose in the east. Asked for final statements, Rentenería said a few unrecorded words and Medrano said nothing. But Miranda said, “In New Mexico, there is no justice for the poor man. He is led like a helpless lamb through the courts and to his punishment. This is an injustice you are now doing.” Then Sheriff John Block led the men behind a canvas drape, the low sun casting stark silhouettes against the fabric. The day broke in earnest as the men dropped to their deaths.

It didn’t take long for Vaisa’s conviction to be upheld and, on April 6, 1923, he, too, was brought to the gallows in Estancia. With few observers and after offering that he had no final statement to make, John Block adjusted Vaisa’s noose, the trap door opened, and Vaisa fell as the sun again crested the horizon. He was the 75th and last person to be legally hanged in New Mexico.

Here at City of Dust we like to get our facts straight, which is difficult with the internet around. The more commonly cited story of the above attack includes four robbers striking in the dead of night, with three men being hung and the fourth getting the electric chair. Also, the robbery occurred in 1914. Is the devil in the details? Well, the story I recounted is clearly better and, while I wasn’t there, that version is from “Myth of the Hanging Tree: Stories of Crime and Punishment in Territorial New Mexico,” by former New Mexico State Historian Robert J. Torrez. Mr. Torrez cited contemporaneous editions of the Estancia News-Herald and seems pretty reliable to me. 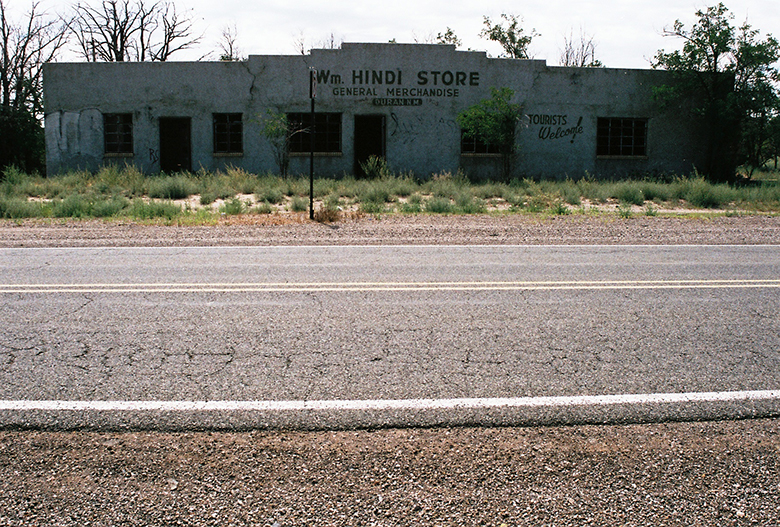 In any case, William Hindi was also from Lebanon and operated a store in Duran, the eye-catching building above and at top, which opened in 1908. It is also constructed of cut stone and its signage still clearly welcomes tourists, but much in the world has moved on while the little store has stood still. At least the graffiti inside, some of which reads, “go hug someone,” “god rox,” and “satan is gay,” would lead one to envision a history far more whimsical than that of the general store. William’s brother, Kasim, also operated a store, but his was across the highway from the Coury Merc. Co. 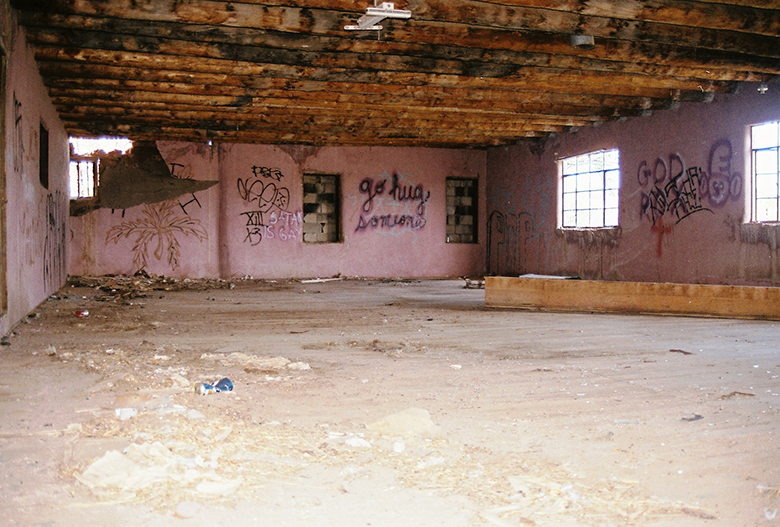 Other buildings around Duran are still in use, including the San Juan Bautista Catholic Church, built in 1910, the red brick school, which closed in 1955 but has been re-purposed as a community center, and the fire station and post office. Thus, unlike some other towns where the trains now whistle right by and motorists are few and far between, Duran persists. It also most certainly sees fewer hanging crimes.

The jumbled tale of the robbery of the Coury family may have originated with a resident of Duran and is retold at ghosttowns.com. To read the more academic version, see Torrez. There is also an odd tale of a boy from the East Coast hitchhiking back to Duran in the 1960’s and starting a life. And that’s everything I could find about Duran. Oh, and the shot of the coffin is from Apacheland Movie Ranch in AZ, not Duran.

This story originally appeared on the City of Dust blog.