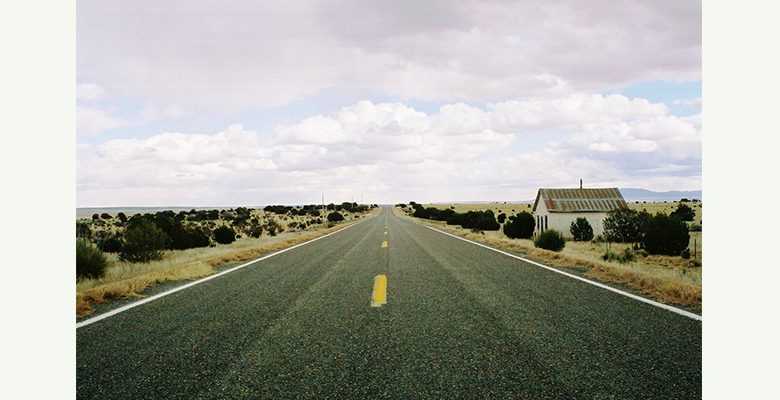 Too Small to be a Village, Not Large Enough to be a Town 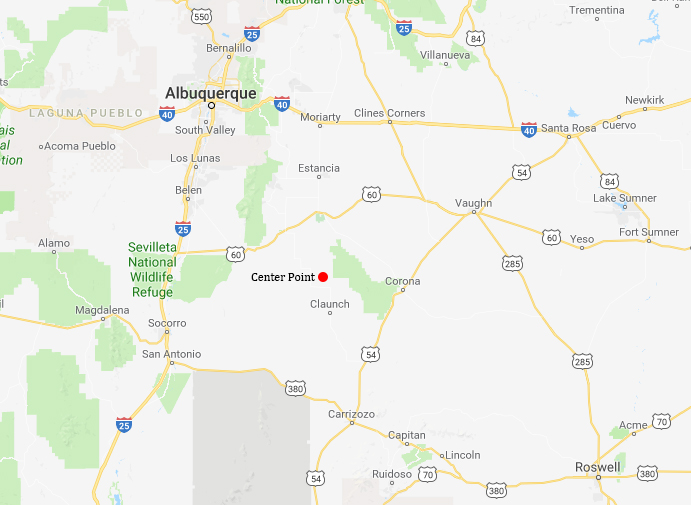 On Highway 55, about 40 miles south of Mountainair, New Mexico, is a charming old one-room schoolhouse. It’s one of those abandoned places that is a sheer pleasure to visit. I even put the above photo on my City of Dust “business” cards. But where exactly are you when you’re at this school? For many years it was a mystery to me as I could find no record of anything besides pinto beans existing in the area. Enter the internet. After a few photos (not even my photos!) of the school showed up on ghost town and history-related Facebook pages, the story of this little dot on the map, which, it turns out, was known as Center Point, finally came to light. 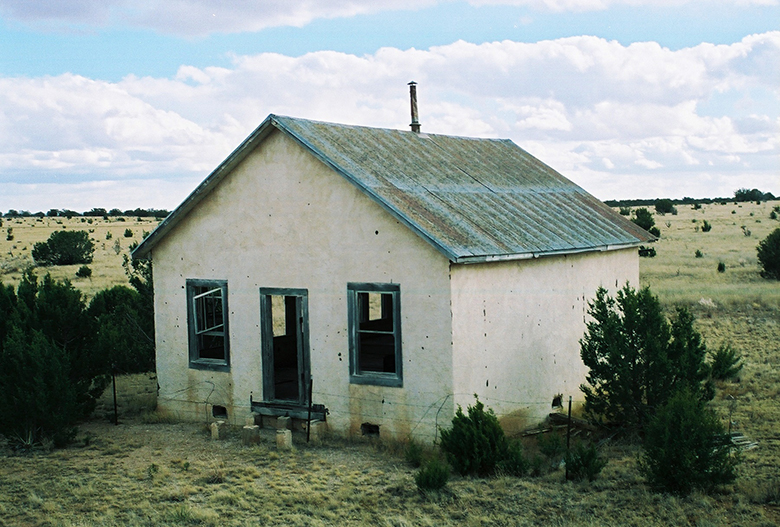 Center Point isn’t in Robert Julyan’s comprehensive The Place Names of New Mexico, but I can still tell you how it got its name: It’s smack dab in the middle of the state, right by Center Point Hill. The only “official” mention of Center Point seems to be in “Mountainair, N.M., Centennial History, 1903-2003” by Bert Herrman (published by Mountainair Public Schools), which includes Center Point in a list of area schools: “Many rural schools were three-month terms and began after New Mexico became a state in January 1912. Teacher’s salary was $25 a month. Many of the teachers were 16 or 17 years old; they boarded at homes until small teacherages could be built for them. Dozens of schools dotted the countryside as the region developed. There was Eastview, Center Point, Piñon, Round Top, Ewing, Cedarvale, to name just a few. Typically, each had one room and one teacher that taught grades one through eight. The teachers often lived in shacks next to the schools.” 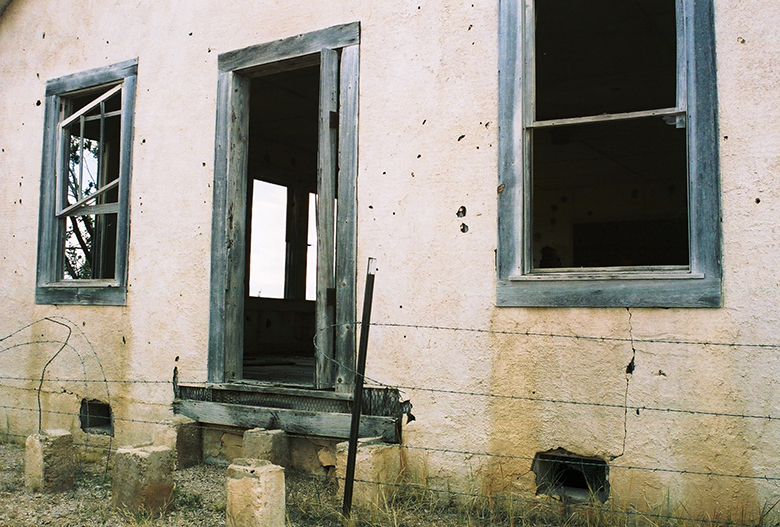 Beyond that, the initial bit of first-hand information about Center Point came from S. Smith-Cumiford, who saw a photo of the school on-line and said, “That’s on the road to Gran Quivira. It looks like the school built on land donated by my grandfather-in-law, John Cumiford, who was a land-granted rancher and whose homestead ranch was the last to be sold off, in 1985.”

A short time later, H. Thomas added some poignant history about John Cumiford who, it seems, also built the school: “John Cumiford came to Mountainair from Independence, MO in a covered wagon with nine children, his wife dying en route or shortly after as a result of childbirth. He never remarried but was cared for in the late 1950’s by my mother-in-law, who had some nursing background. He built this schoolhouse which also doubled as the chapel on Sundays.” 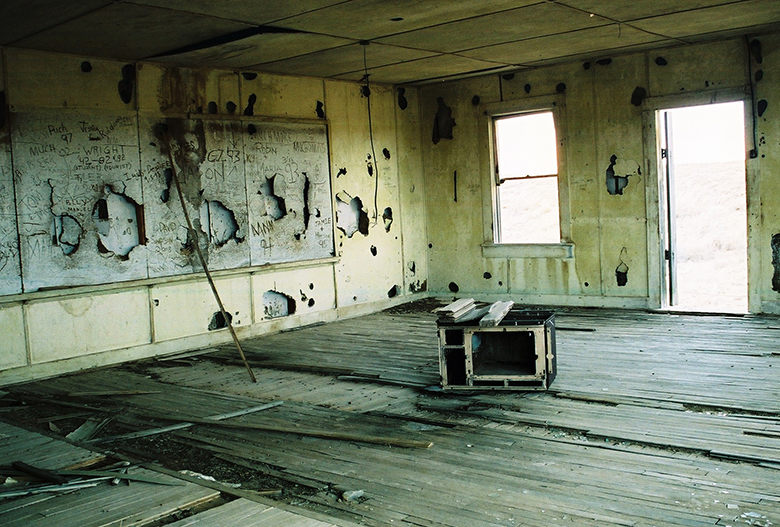 Then came a wonderful account from J.E. Bowers, who grew up in Center Point, and through Facebook comments provided what is likely the most extensive history of the place in existence: “My mother, Florence Drew Tausworth, taught in that schoolhouse. My brother and I went to school there. We lived in that shack across the street. When it snowed we would wake up with snow on our beds. This was in 1946-1947. There was no community. Just the schoolhouse and the shack. There was a cistern where we got our water. We had a pot-bellied stove in the house. The people lived on their farms and brought their kids to the school.

“My mom taught all the grades. There was a wood stove in the schoolhouse and my brother would go over every morning and light a fire. There were three of us. My oldest brother went to school in Mountainair. It was his job to chop the wood. The wood was brought in by the people that lived in the area. My uncle was the preacher in Mountainair so he would come get us once in a while and take my mom grocery shopping as we had no car. 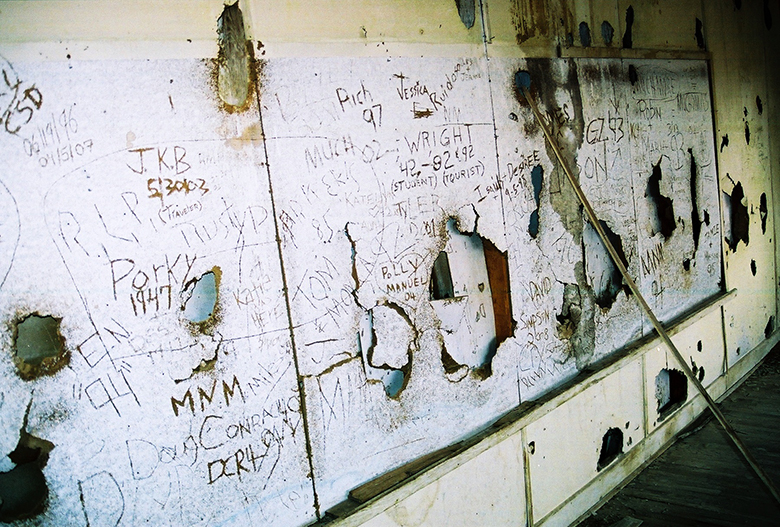 “I thought it was the most wonderful time in my life, but my brothers felt differently because of the hard work they had to do. Oh yes, I forgot, there was an outhouse. I don’t know when the school was abandoned as we moved to Willard the next year. I was quite young. We had enough kids for a baseball team. As you are standing looking at the school, to the back left was where we played baseball. My mom was quite brave to live out there with us three kids.

“The only name I remember that lived close by, maybe a mile or so, was Garrison. One of their sons (Larry, I believe his name was) was a year older than I was. We went back to visit them a year or so later, and Larry had died of food poisoning from home canned green beans. 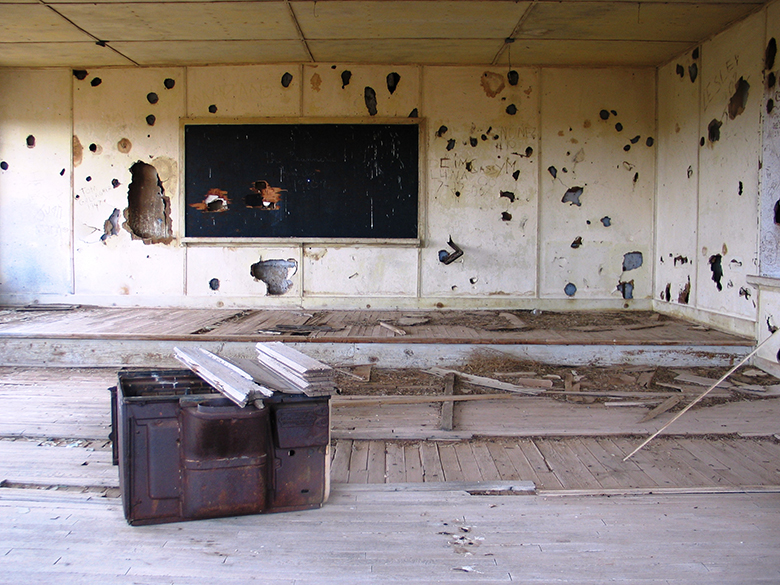 “The house doesn’t look the same. It has been ‘updated’ since we lived there. LOL. I don’t believe it had the ceiling or the drywall and insulation. There were cracks in the walls and ceiling and the wind, snow, or rain would come through. We had to use pots and pans to catch the rain. We had a rain barrel also and we used the water to wash our hair with. Mama would heat water on the stove for us to take baths in the washtub. We had a chamber pot which my brother had to empty every morning. Being the youngest, I never had to do anything.

“We had no toys. So we went wandering. My brother says he got lost one time and it took him quite a while to find his way home. We looked for birds eggs in the piñon trees. We ate a lot of beans. I do remember buying margarine and mixing the yellow packet that came with it. Mother made a lot of corn bread, so cornbread and beans was our main meal with the margarine on the cornbread. 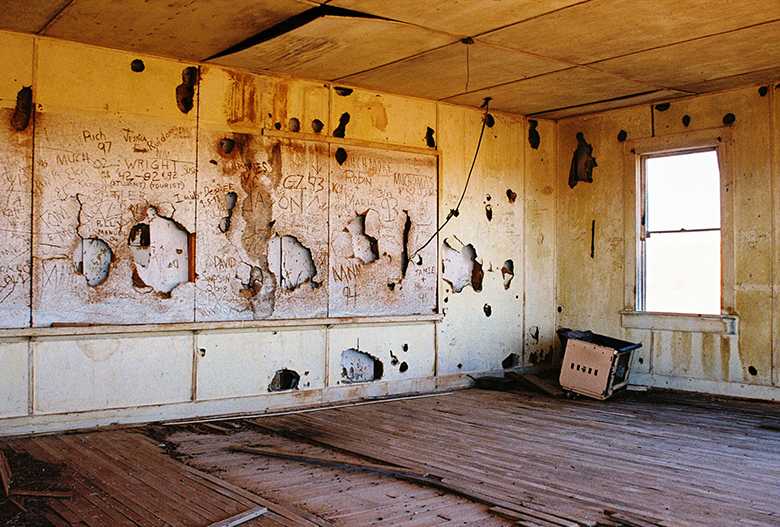 “It’s been so long ago that it’s taking me a while to think of things. When I said I had no toys, it made me remember. My Aunt Leta Hood cut pictures out of magazines for me. They were my paper dolls. I also had some jacks. I was a whiz at jacks. My mama would get down on the floor and play with me. Years later, when my daughter was that same age and we went to visit my mama, she got down on the floor and played jacks with my daughter.

“My mother was the treasure. I can’t imagine taking three children to a place with no modern convenience. This was where I got my love for reading. I read anything and everything. (Even the Montgomery Ward catalog in the outhouse. LOL.) Wouldn’t it be nice if things still cost the same as they were in that catalog?

“So many people had it much harder that we did, but fortunately for me and my brothers, we had a very determined mother. So, to me, this story is about my mother, who was determined to be a teacher. She’s the one who brought her three children from Texas to New Mexico. And she’s the one who probably gave those children in Center Point one of their most memorable school years, as she loved teaching and she loved children. 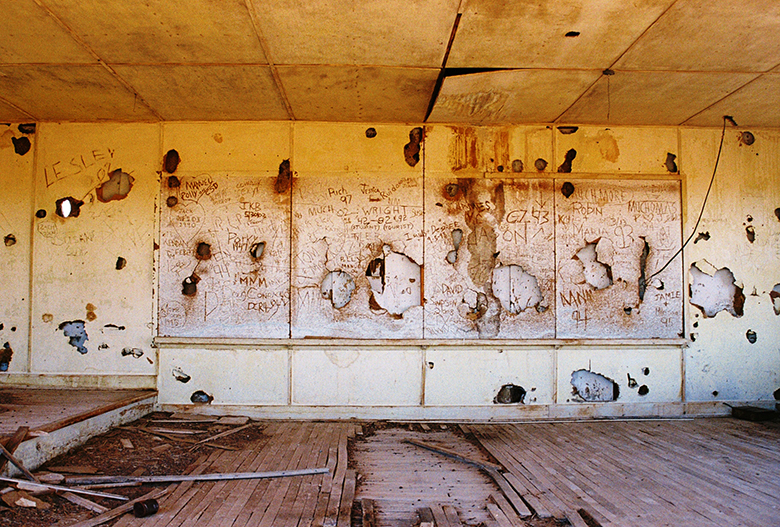 “Here’s what my eldest brother said. (Funny, we all have the exact same memories.): ‘Mom taught grades 1 thru 5. I, a 5th grader, was the janitor of the school with a monthly salary of $5.00 which went to mom to help with expenses. During the winter we all slept with a hot rock wrapped in a towel and it went cold too fast. Brother Bob was to keep wood chopped for fire wood and help haul water on wash day. The cistern was always dry and we had to have water hauled in at $10.00 a load. On Christmas eve, the school children put on the Christmas play and we wore bathrobes to be the Three Kings.

“‘On New Year’s Eve there was a group of local men who played instruments and came and put on a “jam session” for the local people. And, yes, we could have all the pinto beans from the fields we wanted, and go pick leftovers after harvest. But at that altitude they took a long, long time to cook. And I hiked to Gran Quivira one time not realizing it was five miles away. Thought I was never going to get back home. But I found a beauty of an arrow head. 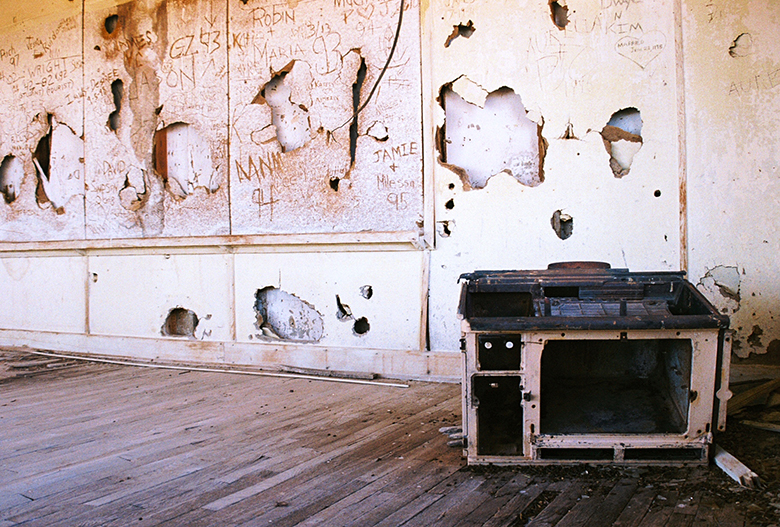 “‘Like you, the only names I can remember are the Garrison’s. They lived in the next house north of us, about a mile up the hill, on the east side of the road that was surrounded by trees. There were two boys that I remember, one a senior in high school that year, I believe. I think his name was Glen. He used to supply us with firewood. I don’t remember anyone else that I rode with on the school bus. When I was there, probably 20 years ago, I couldn’t find the house, and the trees were gone. All that land was bean farming and there were lots of piñon trees. When we were there last, both were gone.’”

It’s true. So much of Center Point has slipped quietly into the past that even its memory was hard to find. But it has been found and now if you Google “Center Point, New Mexico,” well, you might wind up here and read just about everything that’s ever been written down about the place. One thing that has not been found is the house that J.E. Bowers grew up in. If it’s still there, it can’t be far from the school. I’ll have to take a closer look next time I’m in the center of New Mexico. (UPDATE: From J.E. Bowers: “The shack the teachers lived in is gone. It was right across the street. It probably fell down. LOL.”) 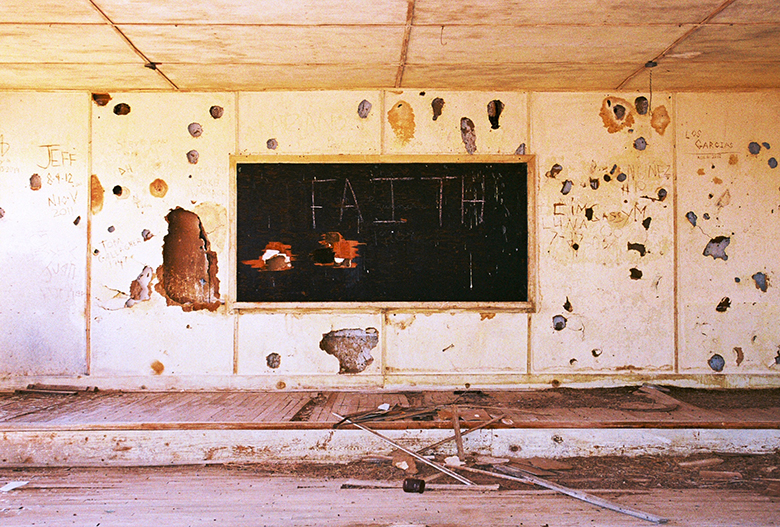 Information for this post came from people that knew Center Point and that book about schools around Mountainair. And that’s it! I cut-and-pasted the comments of S. Smith-Cumiford, H. Thomas, and J.E. Bowers and her brother from Facebook and with luck they’ll find their way here and give City of Dust their blessing! I thank them for sharing their memories and present them here with the utmost respect, even if I did sort of steal them (for now). 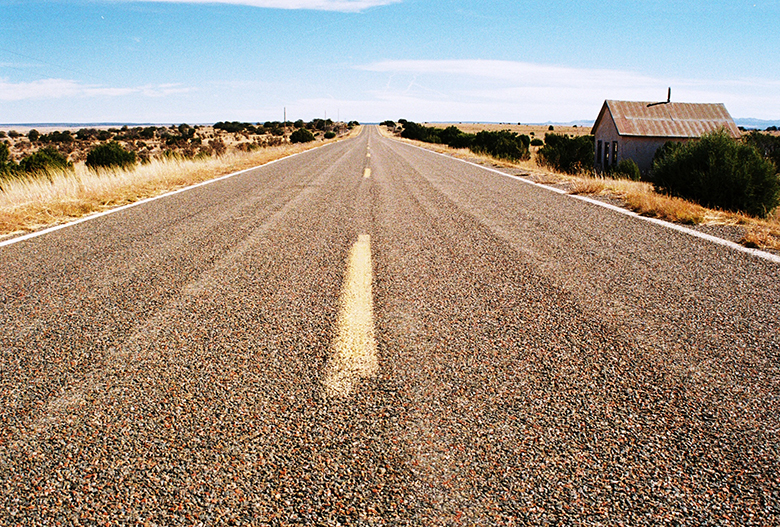