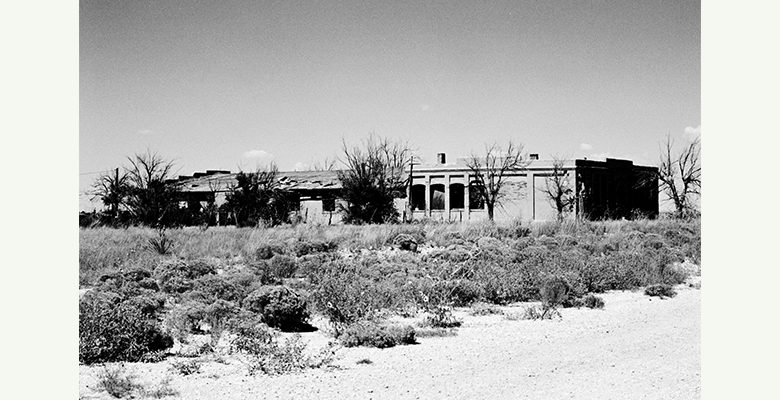 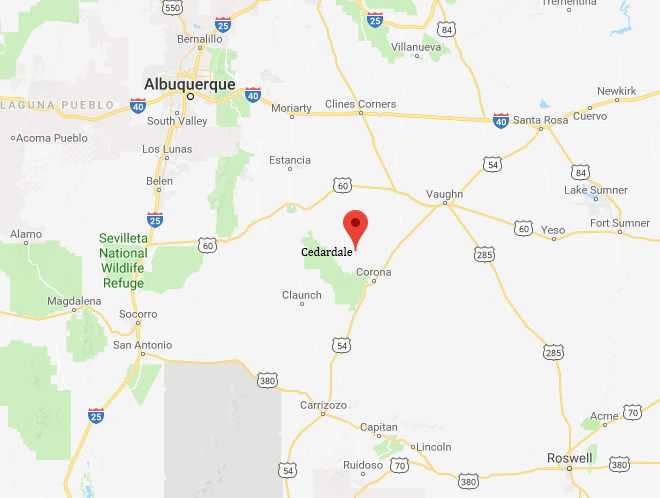 Let’s stay in central New Mexico for one more post and add yet another piece to the picture of a region that in the 1920’s was the country’s largest producer of pinto beans. While you probably aren’t going to drive through without reason, as you might Mountainair, nor are you going to find it in most ghost town guides, as you will Claunch, Cedarvale was an important dry land farming and ranching community from the time of its establishment in 1908 until the Dust Bowl and Great Depression combined, along with overgrazing and farm consolidation, to force many of its residents to search for their fortunes elsewhere…yet again.

It was Ed Smith, William Taylor, and Oliver P. DeWolfe who chose the site for Cedarvale and requested that it be surveyed by the U.S. government. The town would be along the route of the New Mexico Central Railroad. Lots were sold through the General Land Office and a post office was soon opened. The new place was named Cedarvale after Cedar Vale, a town in Kansas from which the founders hailed and was also located in a valley with cedars (i.e., junipers). 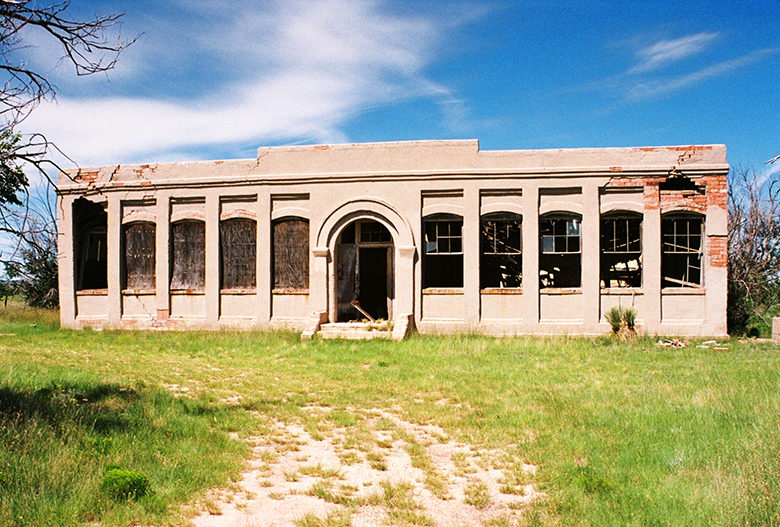 Soon hundreds of homesteaders from other states arrived on “immigrant trains,” following the lead of Smith, Taylor, and DeWolfe. Most were looking to plant pinto beans. The relatively high altitude (6,384 ft) and short growing season of central New Mexico was good for the beans, which could be dry farmed and were in demand, particularly once World War I began and pinto beans were used to feed soldiers. Come fall, the harvest was stored in Cedarvale’s three elevators.

The population of Cedarvale would eventually reach about 500, but is now perhaps half that, and there are no functioning commercial concerns. The post office closed in 1990. But what impresses one most as they approach from the northwest along Highway 42 is the looming wreckage of the Cedarvale School. Initially, the school in Cedarvale was a typical one-room affair, but as both the town and Torrance County grew more space was needed. So, Oliver DeWolfe donated 20 acres of land and, on August 25, 1917, the Torrance County Board of Education approved a bond issuance in the amount of $5,000.00 to construct a new school. 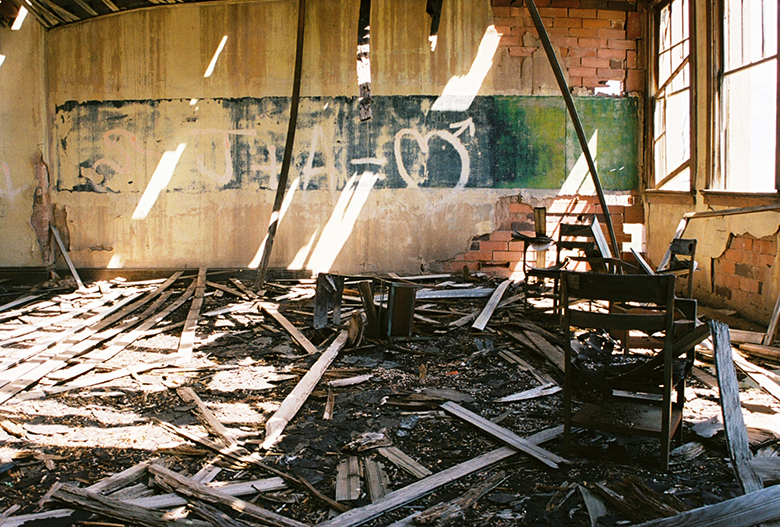 The school was finished in 1921 and an addition made in 1935 via the Works Progress Administration (WPA). By then, the building seems like it would’ve been surprisingly big for the area, containing four large classrooms, each of which contained three grades and about fifty students. Children attended kindergarten through eighth grade and were then driven in the back of a truck a few miles southeast to Corona for high school. No fancy Bluebird busses here!

Aside from continuous and dire warnings about rattlesnakes, the massive gymnasium remains perhaps the most striking feature of the Cedarvale School. This was clearly a gathering place for the entire community, as well as a basketball court (complete with raw wooden backboards still in place) and, judging from the design, probably a theater. I’ve heard it hosted some bingo games, too. Despite taking the warnings fairly seriously—signs are even painted on the walls of the school—no rattlesnakes were encountered on this trip. 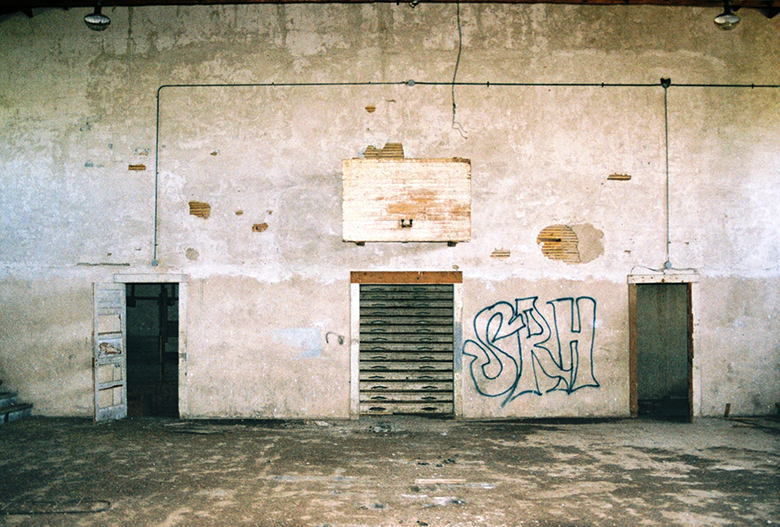 The school closed in 1953 and is now falling down quickly, the years finally overcoming its sturdy construction. The large wooden beams are impressive, and I’m told the Cedarvale train depot was built to the same hardy specifications. The depot no longer stands, but the materials were re-purposed and used in a home in Albuquerque which is owned by the daughter of a man who helped build both the depot and the school. I’m pleased to have been able to walk around on that historic lumber recently!

There are still many people that have fond memories of growing up in Cedarvale, as is true for virtually all the small central New Mexico towns in which the train once rattled through constantly and the whoosh of pinto beans pouring from the elevator heralded the end of one season and the approach of the next. These are sounds which may yet perhaps be heard, if only faintly, in the startling quiet of places like Cedarvale. 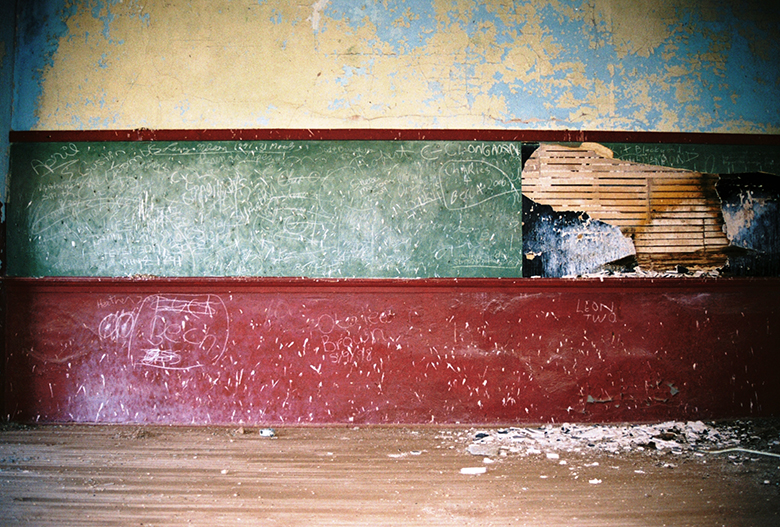 As I said, there ain’t much out there on Cedarvale. David Pike’s “Roadside New Mexico: A Guide to Historic Markers” has a good synopsis of the town’s founding and the history of the school. You can glean a little bit more from “The Place Names of New Mexico” and its similarly-named predecessor, “New Mexico Place Names: A Geographical Dictionary.” Beyond that, you’ll have to hope that maybe someone that was there will tell you what it was like. 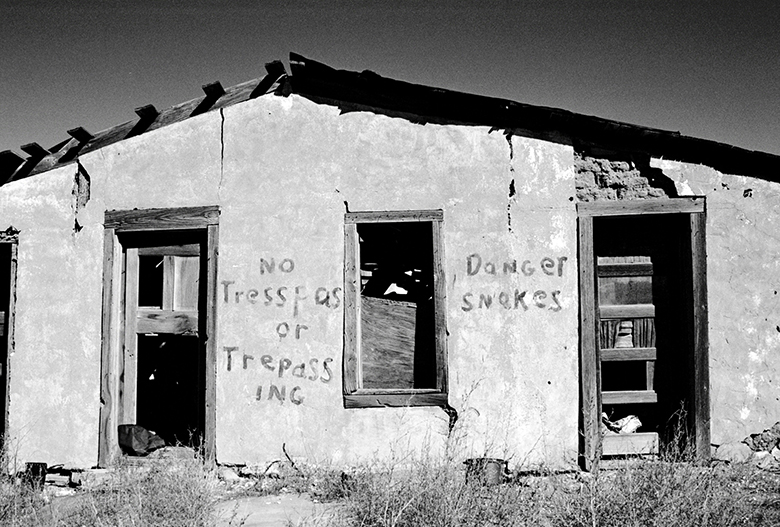