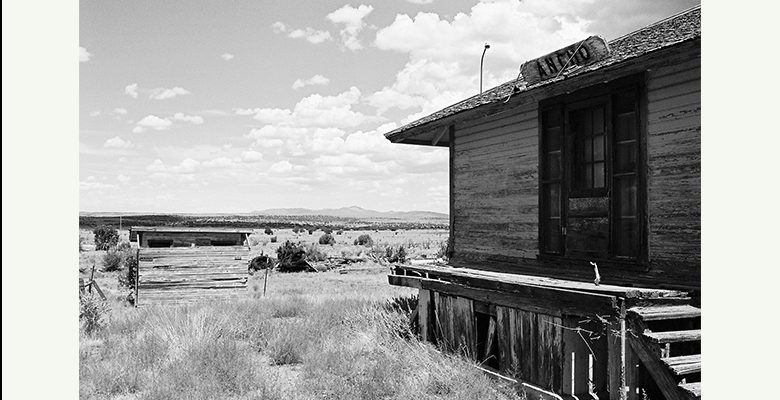 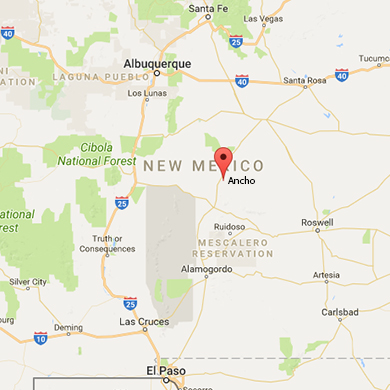 but right now we’re going to visit Ancho, in the northwestern part of Lincoln County.

Ancho (pronounced like the first part of “anchovie”) is Spanish for “wide” or “broad” and refers to the valley in which the town sits. Most towns in New Mexico were born by the railroad or minerals and Ancho owes its existence to both. The El Paso and Northeastern Railroad pushed into the valley around 1900 and designated that there be a stop in the vicinity. Within a year, a gypsum deposit was discovered not far away and a plaster mill was built, operated by the Gypsum Product Company. In 1902 (or 1905, depending on your source), a proper railroad depot was put up and some company houses constructed. In 1905, the Ancho Brick Company was created to utilize the abundant fire clay in the area. 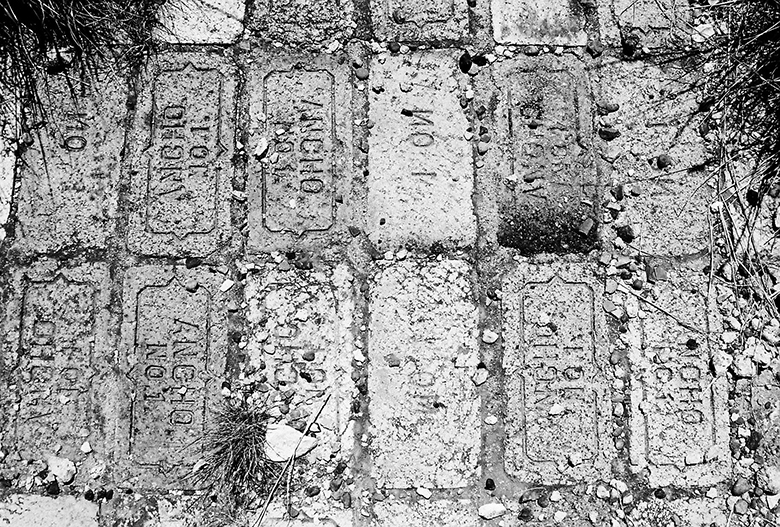 For a time, the heart of Ancho was made of plaster and brick. Ancho-made bricks and plaster helped rebuild San Francisco after the 1906 ‘quake and more bricks were used for smelter stacks in Arizona. In 1930, the town used its own product to construct a large, brick schoolhouse, replacing the small, wooden, one-room job that burnt down. The school had as many as five teachers and 140 students. However, Ancho was in trouble. Phelps Dodge had purchased the brick plant in 1917, enlarged it, and then shut it down following bankruptcy in 1921. It was finally dismantled in 1937 by the Abilene Salvage Company. There was a slight increase in population during the Depression as desperate families tried to make money mining for gold in the Jicarilla Mountains, but that was short-lived. In 1954, U.S. 54 was laid out, cutting Ancho off by over 2 miles on the route between Corona and Carrizozo. The school closed the following year. In 1959, the railroad shuttered the depot (photos at top and below) and the final nail was put in Ancho’s coffin. Almost. 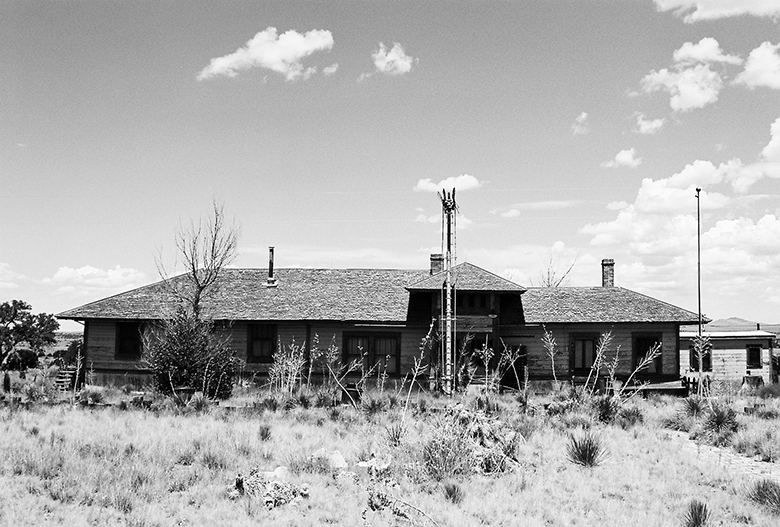 In 1963, Mrs. Jackie Silvers purchased the old depot, somehow moved it off the railroad right-of-way, and then filled it with all manner of antiques from the area. My House of Old Things, as the “museum” was called, got a rave review in Varney’s New Mexico ghost town book. He called it “a wonderful conglomeration of all the things you thought nobody had saved” and said it was “not to be overlooked.” But Varney’s book is over 30 years old and so we didn’t get our hopes up. This was good because, while it was still easy to find My House of Old Things, it was immediately clear that it was very closed and had been for years. A disappointing reversal of our fortunes in Chloride. A still-furnished cabin nearby hints at what used to be on display. 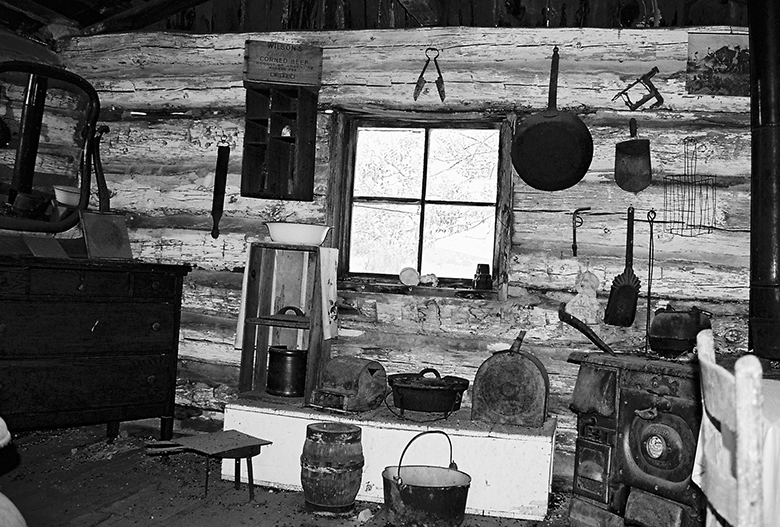 Later, in nearby White Oaks, we met a man born in Ancho. It was revealed that Mrs. Sara Jackson, who’d taken over the house when Jackie, her mother, died, passed away several years ago. Her family had 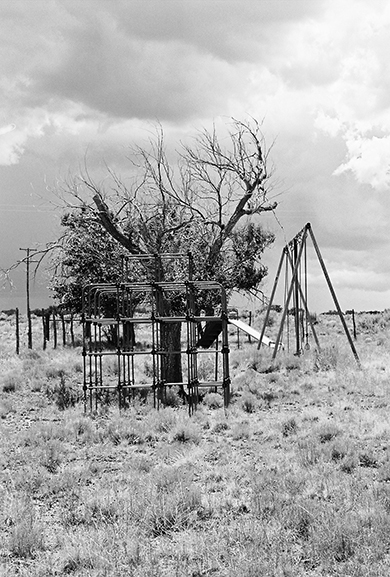 expressed no interest whatsoever in maintaining the house or its old things. Apparently many items were sold on EBAY, which we were told was“heartbreaking” given their relation to the history of ranching, farming, and homemaking in the region. Who knows what was sold, but peeping inside it appeared that much remains. Furniture, clothes, an old wooden letter box. Through one window was a mannequin head, seemingly presiding over the dust and decay, waiting for something to finally happen. It may be a long wait. The old playground, abandoned over 50 years ago, still stands, made of bolts and bits of pipe that no school would allow children to play on in this day and age. The school, pictured below, seems to have fared better and is now a church. Though who attends I have no idea.

Not one car passed down the road during our visit. The town was completely silent. Lightning flashed on the horizon and for a brief moment a few big drops of rain fell. Only one building seemed occupied and, indeed, we learned that someone does live there. So, this is Ancho in 2012, population 1. 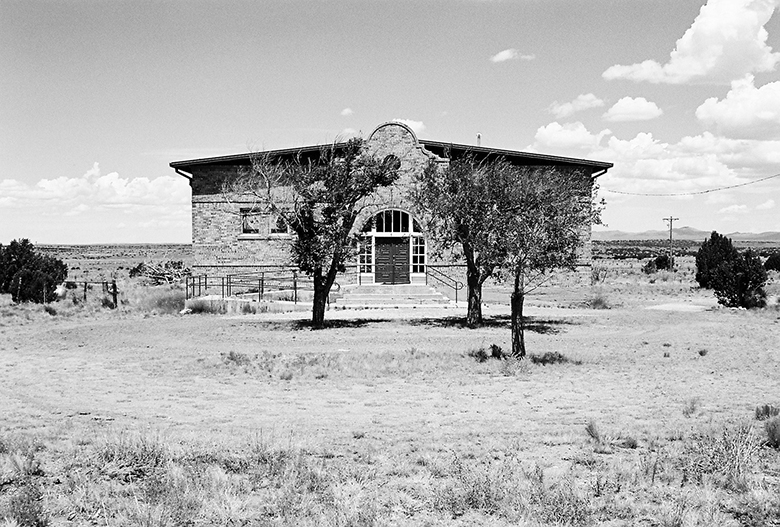 As so often happens, most of the info for this post came from Philip Varney’s ghost town book, but Legends of America fleshed out some details.