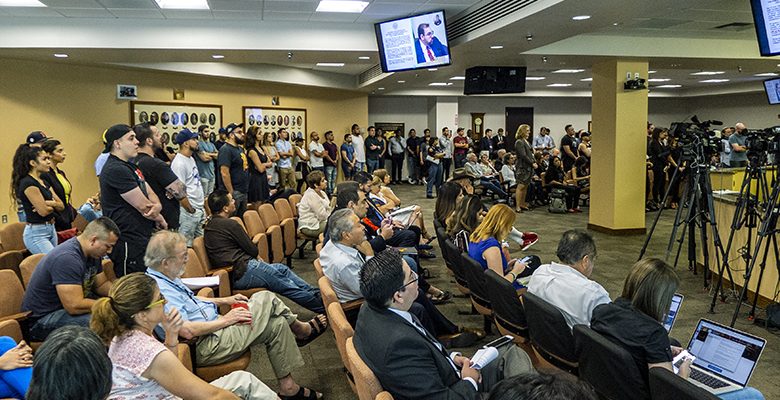 I went to City Council last week to watch the Veto Theater. Chambers was packed with bar owners and employees protesting a new law that takes effect September 1. The law, as written will prohibit amplified music on patios after midnight.

A new noise ordinance slated to take effect Monday is being hailed by some disgruntled neighbors as a solution for loud music from bar patios, while business owners say it limits the livelihood of El Paso’s nightlife scene.

The noise ordinance is targeted at businesses that are within 350 feet of a residence and play amplified sound outdoors, including live music, DJs and speaker systems.

Beginning next week, businesses will have to quiet outdoor music at 10 p.m. unless they get a permit from the city, which would allow the music to keep going until midnight.

Several residents who live in Kern Place, the historic neighborhood behind the Cincinnati Entertainment District, spoke at Tuesday’s City Council meeting during public comment, saying the noise from nearby bars makes living there at times unbearable, especially on weekends.

“This is my reality,” said Kern resident Anne Giangiulio. “I hear their music in my bedroom and cannot enjoy my own backyard Thrusdays through Sundays. I’m a parent, and for those of you who can relate you just wanna crash into bed, exhausted.”

But some bar owners say the ordinance will hurt their businesses. Austin Allen, president of the El Paso Bar and Restaurant Owners Association and owner of the Love Buzz bar in the Five Points neighborhood, said many bars receive at least 70% of their business after midnight.

“This ordinance as it stands is harmful to small businesses across the city,” Allen said. “Without a doubt, it will have a negative impact and will shut businesses down.”

I know about bars. A lot.

Bars are probably the most heavily regulated mom-and-pop industry in Texas. Owning a bar is a tough business. The barriers to entry in Texas are relatively low, so there’s always a new bar right across the street. Not everyone gets into the bar business to make money. Some people get into the bar business for the perceived benefits, like sitting at the cool kids lunch table.

Passing a law that restricts all bar owners because of the bad behavior of a few popular bars is Draconian and ineffective. The bar business doesn’t need any new laws. There are plenty of existing laws that could be used to bring bar owners to heal. And some bar owners will accept a modest fine as the cost of doing business.

There are plenty of existing laws that could be brought to bear on bad neighbors. Like, did you know that it’s illegal to serve an intoxicated person? And did you know that the determination of Public Intoxication is solely at the discretion of the arresting officer? Send a couple of uniformed officers to walk through the establishment, with a TABC officer, sometime after midnight. Nothing kills a party like the arrival of the cops.

The cops wouldn’t even have to arrest anyone. They could just walk through an offending bar at 12:30 and perform a couple of field sobriety tests. Problem solved.

Or El Paso’s Best could wait for patrons to come out, and ask them to do some of those Stupid Human Tricks on the sidewalk.

Or park a marked unit out in front of the noisy bar.

(I understand that the cops could bag their limit of offenders breaking various laws, like littering, or indecent exposure, just by walking through some of the neighborhoods after closing time.)

Why would City Council get a sledge hammer when they already have a fly swatter? Is it politics?

I guarantee you that only a few of the bar patrons vote. However, every one of those bar owners and employees who took the time to show up at City Council will vote, if just out of spite.

Does City Council want to pretend that they’re some of the cool kids? Good luck with that.