I’d like to tell you that I’ve puked in every bathroom in the Abdou Building.

But that would be untrue. After a bit of research, it’s been discovered that I have only tossed my cookies in nine of the ten available toilets in what we affectionately refer to as “The Building.” Carlos on the 6th floor never engaged in debauchery with the rest of us, so his water closet remains an unknown labyrinth to me. I’d like to consider myself intimate with all of the other commodes, though. They know my all darkest secrets. The drugs, the vomit, the illicit meetings of female prattle and gossip. But my time there started with much more innocent intentions. 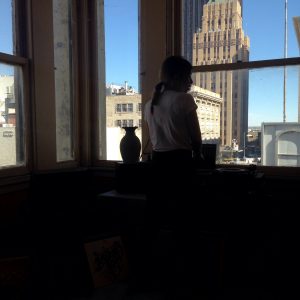 For those of us that braved urban living in downtown El Paso (before it was trendy), that building has been a living, breathing, blood-relative. It’s been our shared organ. Back when the only cool bar for miles around was the Tap. Carlos on the 2nd floor, was a photographer. “Pierre,” the Persian-Jew who owned the building on the 3rd floor. Joey & Vianey, the chef and beauty-savant living on the 4th floor. Justin and Jenni, grammy-winning audio-engineer and printmaker/ballerina on the 5th. 6th floor Carlos was an architect, and at the time, the 7th floor held painter Cesar Ivan, and his girlfriend Melissa, an english teacher and hippest woman this side of the Franklin Mountains. During my time there, these people would come to educate me in ways I was unaware of being unaware of. If it weren’t for that poured concrete, the person I am today would be someone else entirely.

My first excursion into DTEP’s Bauhaus happened when I was 16. I was enlisted as a baby-wrangler for Justin and Jenni. Their apartment was swank. SWANK. I marveled at everything. The architecture, the decor, the neighborhood. People actually lived like this? In El Paso? I felt like I was in New York. I somehow managed to survive my short imprisonment without any damage to then six-month-old Ari, and so began my entire life.

I’d been babysitting for J&J two years when I turned 18. There was an empty studio apartment on the 4th floor, and with a good recommendation from Jen, Pierre actually called ME. He offered me the spot for $100 my first month. Furnished!!! No deposit!!! And after that, I paid $195 (utilities paid) to live in a room smaller than a single car garage, with a 1920s style lavatory located outside of my apartment (in which I hurled more than any other in my time there). He was crazy!!! I was crazy!!!

Yeah, it was like camping indoors for four years, but it made me tough. It made me appreciate small luxuries (like internet, and kitchens). I learned to be grateful for things like a home-cooked meal. It was an education in reality. 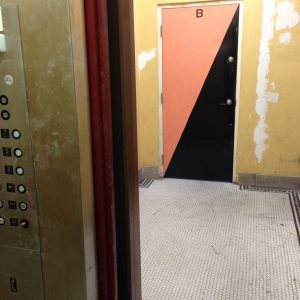 Aside from actual life skills, it bred my creativity. If anything cool was happening in El Paso, one of my neighbors was involved in the inception, conception, or execution. To be in the middle of that much action without actually doing something with yourself is damn near impossible. It was a matter of months before I started discovering my own creative path.

That’s the building in which I received my first guitar. The walls that witnessed the birth of my first songs. I met my first great love (twice). I had my first heartbreak (twice). I met high-caliber rockstars and low-caliber thugs. I learned from success and disappointment. This building was the epicenter of my personal growth. To watch its own changes have been humbling. It is the patriarch of our little family of pirates. It will go on to be offices, or something equally sanitized, apartments too expensive for anyone cool to live in, and all the memories we gathered there during our stay will be whitewashed with the rest of downtown El Paso. As sad as it is, we are part of the old downtown. We do not belong in that space anymore. This city will grow and change far beyond what we thought was possible. And we will be watching from the suburbs… With love.

Hope Wright is a musician and writer born and raised on the lower west side of El Paso, Texas.